Slowdown: Modi Govt. Is Ignoring the People While Pandering to Corporates

The country is in the grips of a severe economic crisis. Economic growth has slumped to just 5% in the April-June quarter of this year, with growth in agriculture, the biggest employer, has been even less, at just 2% while manufacturing sector has grown by a mere 0.6%.

Various industrial sectors that have declared job losses include - automobiles, mining, steel, textile, road transport, construction and real estate, IT sector, gems and jewellery, leather, various fast-moving consumer goods producers (like biscuits), and thousands of ancillary industries associated with them. Already, estimates of such job losses are in the range of 10 lakhs, with worse to come in the months ahead.

There has been a frenzy of activity among corporate bodies and their representatives – as also in the media on this slowdown. Among shrill lamentations by these powerful lobbies, whom PM Modi calls “wealth creators”, his govt. has rushed to provide a series of sops – more export subsidies, more FDI, more disinvestment, more money for sectors like real estate, bank mergers and so on.

But there is deafening silence on what will happen to the people – the agricultural and industrial workers, the small and marginal farmers, employees, indeed, even the middle class. The unsaid assumption is that if help is given to the rich, the deprived will somehow get some benefits.

It is in this approach that the govt. is committing a lethal error, for which the people will have to pay heavily in the coming months. The govt. is trying to boost private sector investment by giving them more concessions whereas the real problem is that there is a demand slump. People do not have buying power in their hands. The way out would be to boost demand by – increasing agricultural and non-agricultural wages, increasing farmers’ incomes by strengthening public procurement at higher prices and increasing govt. spending to kick start economic activity. The govt. spending more money doesn’t mean transferring money to the pockets of corporate bigwigs and multinational corporations. It means spending money on education, health, wages of its employees (even its contractual workers) etc. However, these measures are anathema to the Modi govt. as they were to previous Congress govts.

Meanwhile, have a look at what the people of the country – the real wealth creators, not parasitical corporate bigwigs – are going through.

The job losses mentioned above are occurring in the background of an ongoing unemployment crisis that has been unaddressed – and unacknowledged – by the Modi govt. since its previous five-year term. Currently, CMIE estimates suggest that the unemployment rate stood at 8.37% in August 2019. Two years ago, it was 3.37%. [See chart below] 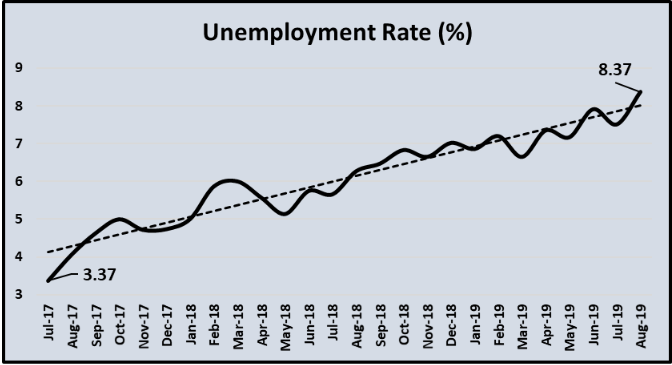 With the current slowdown, an already dire situation is becoming explosive. But the Modi govt. is still relying on their cronies, the private sector, to turn around things. Even when the crisis had not hit industry, they were not generating jobs. How are they going to create new jobs in the present slowdown?

The Modi govt. thinks that by eliminating protective labour laws, allowing more hire and fire, and allowing wage depression, employers will employ more people. But that has not happened before, and it is impossible now. All that it will lead to is thousands getting thrown out.

Things are even more dire in rural areas and agriculture which gives employment – and hence buying power – to over 50% of India’s population.

The stingy government has announced a meagre hike in Minimum Support Prices of kharif produce. Paddy MSP, for example has been increased by just 4% over last year. In many states the cost of production is actually higher. Overall, the MSP does not meet the much-needed benchmark of cost+50% where cost includes not just inputs and family labour but also land related costs.

So, the government is unwilling to transfer resources to farmers – a policy that would have certainly jacked up demand in rural areas and helped the economy.

It is a measure of the callousness of this govt. that warehouses are overflowing with food grain even as hunger deaths continue in parts of the country. As of July 2019, rice, wheat and coarse grain stocks held in the central pool were at an all-time record level of 742 lakh tonnes, and in August it stood at 713 lakh tonnes, 14% higher than last year. On the other hand, offtake for distribution through the PDS was a mere 195 lakh tonnes till July this year, only 4% higher than last year. Not only is this indicative of the criminal indifference of the Modi govt. towards the people of the country but it also indicates its unwillingness to spend money in arranging for the speedy distribution of precious food grain. The high stocks also indicate the absolute immiserisation of people so much so that despite pervasive hunger (an estimated 20 crore people in India are under-nourished as per FAO estimates for 2019) people cannot buy the grain from open markets.

As far as the poorest and most exploited section of the economy, the 15 crore agricultural labourers, are concerned, they have been out of sight of the govt. for a long time. Their wages have grown by a mere Rs.20.25 or 3.8% over the past two years while the Consumer Price Index for Agricultural Workers increased by just over 4% in the same period, as per RBI data. This means that inflation is wiping out the meagre gains – the real wages are declining. [See chart below] 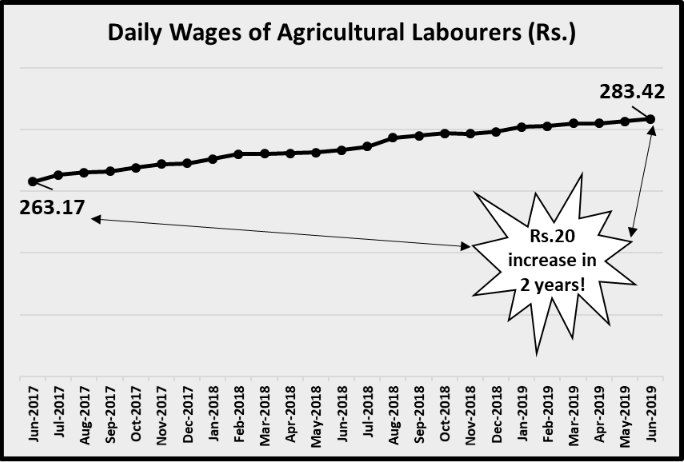 Far from injecting much needed money into the rural sector by increasing wages and enforcing them, the govt. has refused to consider the plight of agri-workers. No wonder, demand is so depressed in the rural areas.

The attitude of the Modi govt. towards workers and employees is so hostile that it has amended labour laws to remove any reasonable standards for fixing wages and working-hours. This is evident in the recently passed Code on Wages and the Code on Safety, Health and Working Conditions.

In fact, the labour minister announced that the new revised national floor level minimum wage would be Rs.178 per day, up from Rs.176 per day. This level is less than a third of what the govt. has accepted as the minimum wage for its employees, based on a well-settled norm, ratified by the Indian Labour Conference sessions and even the Supreme Court.

Barring two states, in all the other states of the country, minimum wages fixed by the respective state govts. are less than 50% of the Rs.18,000 that these norms would require. Now with the green signal from the govt., wage hikes can be forgotten by the workers. 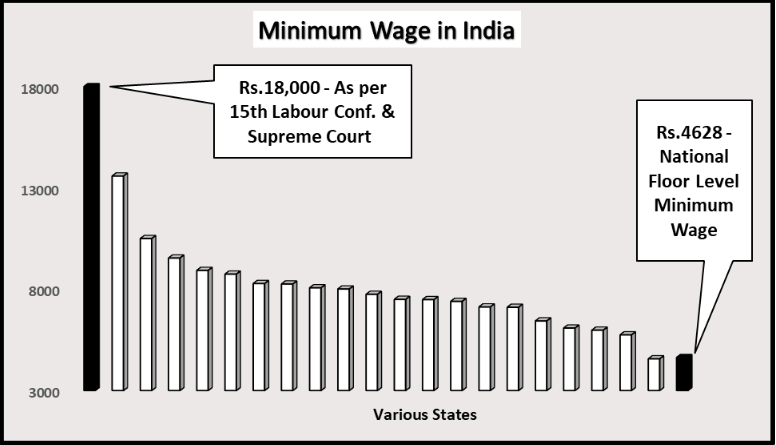 With this approach of keeping working people at starvation wages, all the concessions to corporates and big traders, and big landowners, will not help any economic revival. In fact, it will sink the economy further.

Reduced Funding for Health and Education

Another crucial area where govt. spending could help poor people and thus boost demand in the economy is the key areas of education and health. In both these sectors, infusion of public spending to provide better education and healthcare for all would considerably lower the high burden that families have to suffer by going to private outlets. These savings would in turn boost demand in society and thus help the economy.

For health there is a slight increase in spending from 1.9% to 2.4% of the total budget spending (mainly because of more spending in paying insurance premiums that go straight into the pockets of corporate houses) while as a share of GDP, the health expenditure has stagnated at just 3%. Experts agree that at least 5-6% of GDP must be spent on health.

Thus, privatisation of education and health have led to greater burden on families, forcing them to cut down on various consumption spending that would help the economy.

What all this means is that it is the Modi govt. erroneous policies that created this crisis and it is the continuation of these policies that the clueless govt. is still adopting. It is not going to help the country or its people come out of the economic distress that they are facing.

Modi and his trusted Amit Shah are perhaps hoping that religious fervour, pseudo-nationalism and jingoism will keep the people quiescent – preoccupied with Kashmir, and Pakistan, and Ram Mandir etc. But the way economic distress is spreading they could be in for a rude shock. It is unlikely that people will continue to sing hymns while they are starving, as the old Hindi saying goes.