How Stagnant or Falling Wages Are Destroying Workers Lives

A recent analysis of official data reveals that workers in India across all types of occupations have been suffering a deadly squeeze on their incomes as inflation adjusted wages have been barely increasing, or even declining for the past several years. This has not only devastated the living standards of already ill-paid workers and their families, but it has also led to dragging down the whole economy because people have insufficient buying power in their hands. Meanwhile, profits, incomes and wealth of the rich strata of Indian society have gone on increasing.

The analysis, done by R. Srivastava and B. Padhi, is derived from National Sample Survey Office (NSSO) [now renamed as National Statistical Office, NSO] surveys on employment and unemployment. These household surveys span the period from 2004-05 right up to 2017-18.

In rural areas, the increase was slightly better at 2.9% per year but in urban areas real wages actually declined at – 1.49% per year – every year on an average for these seven years. The chart below shows this, along with comparison to the earlier period which shows much better growth rate, though it is still not enough for a life of dignity. 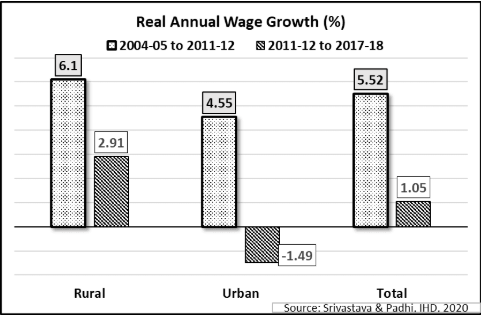 Clearly, this is a policy generated result. That means, it is a consequence of a deliberate policy of suppressing wages of those who labour, in order to boost profits. In the same period, the much celebrated “economic growth” or GDP growth was clipping along at a healthy 7.3% and various govts. were congratulating themselves for making India the fastest growing economy. This is also the period when wealth inequality has zoomed up with the top (richest) 1% of the population owning nearly 52% of the country’s wealth, as in 2018. The Modi govt. has further accelerated the pace of these policies – known as neoliberal policies – by privatising the whole economy, including public sector disinvestment, privatising of healthcare and education; opening of Indian resources to foreign companies; destroying protective labour laws, and cutting welfare programmes.

Wages Stagnant or Dipping Across Sectors

The analysis also delves deeper to find out from available data, how wages have changed in various categories of work. The table below summarises their findings:

In agriculture, the biggest single occupation in India, real wages increased by a mere 1.36% per year for the period 2011-12 to 2017-18. Note that this includes agricultural labourers, numbering some 15 crore, one of the poorest and most exploited class in India. The manufacturing sector, which includes all factories, small or big, the wage growth was even lower at just over 1% per year. In several important sectors, real wages have actually declined in this period – like in mining, electricity/gas/water, trade/hotel/restaurants (big employer), transport and communication, finance and real estate, public administration (which includes scheme workers) and diverse other services.

The analysis also reveals that it is the private sector in which the deadliest squeeze has been out on workers’ wages. As shown in chart below, average wages declined every year by around 3% in private sector enterprises. In government or public sector, wage decline was just short of one percent every year, while it wages increased marginally only in “other” enterprises which are partnership enterprises or individual employers. The analysis shows that in the private sector, wages were growing at 3.3% during the earlier period (2004-5 to 2011-12). So going from there to a decline of 3.3% every year means a sharp fall of over 6 percentage points in the much celebrated private sector. 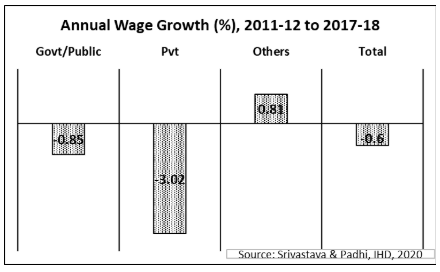 This stagnation of wages has led to a cut in consumption spending by families as they somehow try to cope with the economic distress. This has been shown in a leaked NSO report that said that average per capita monthly consumption expenditure fell from Rs.1,501 in 2011-12 by 3.7% to Rs.1,446 in 2017-18. In rural areas, average per capita consumption declined by 8.8% between 2011-12 and 2017-18, while it rose only by 2% in urban areas over the six year period. Even more worrying is the fact that average food consumption dipped over the period. In rural areas, per capita spending on food fell by 10%, while it remained almost unchanged in urban areas. This is the first time that consumption spending by families has fallen – indicating the severity of economic distress, that the Modi govt. is blithely disregarding.

The crisis for working people and their families has been aggravated by the simultaneous rise in unemployment. In fact, this creation of an army of jobless people has contributed to stagnating or falling wages. Between 2011-12 and and 2015-16, employment declined at the rate of -1.92% per year for the 15+ age group. The authors calculate that between 2011-12 and 2017-18, total employment (all ages) declined at an annual rate of -0.24%. In addition, the usual status unemployment rates also surged from 2.2% in 2011-12 to 6.2 percent in 2017-18, the highest in 45 years. So, the economic distress – and the consequent discontent – is compounded and increases every day.

This has expressed itself in several ways. One is the series of militant strikes and movements by all sections of working people, whether in agriculture or in industry/services. All have demanded better, increased wages as well as end to policies  to policies that create joblessness. The second expression can be seen in the Modi led BJP losing a series of state elections since 2018, with the recent wipe out in Delhi being the latest. People are disillusioned with the BJP’s economic policies and seek an alternative – which will end the current economic policies and bring in more people oriented ones.