Only about 22% of women of working age (defined as 15 years of age or more) were gainfully employed, unemployment among women has doubled and women’s wages/salaries languish at half to two thirds of what men doing similar jobs get. These are some of the shocking revelations contained in the recently released report of the Periodic Labour Force Survey (PLFS) for 2017-18, carried out by the government. It may be recalled that the report was ready in December 2018 but the Modi govt. deliberately suppressed it till after the general elections. 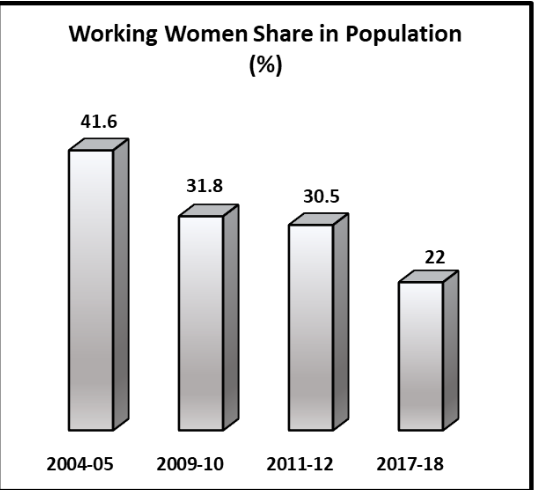 These latest estimates are for what is called the ‘usual status (principal+subsidiary)’ which means that any woman who worked for a large part of the preceding year in an occupation as well as those who worked in subsidiary occupations (for more than 30 days in the year) are included as employed. This is a rather nebulous definition and includes a large number of under-employed women. Despite that, the remarkably small share of women in work highlights the deteriorating problem of women’s employment in the country. No government, whether the current one in its previous tenure or earlier ones have seriously addressed this tragic situation.

This has happened during the tenure of the first Modi govt. Coming in the background of a worsening jobs crisis, the plummeting women’s employment rate shows that it is women who have borne the brunt of the jobs crisis that Modi presided over. Not only did Modi and his government fail to boost public investment, push industrialisation and relieve farm distress, it had no clue about how to increase women’s jobs.

Women Want Work, But it Is not available

Are women unwilling to work, as is often argued by apologists for the govt.? Other information in the PLFS report contradicts this view. As the chart below shows, women’s unemployment, that is, the share of women who are seeking work but unable to find it, has increased precipitously in the past few years. 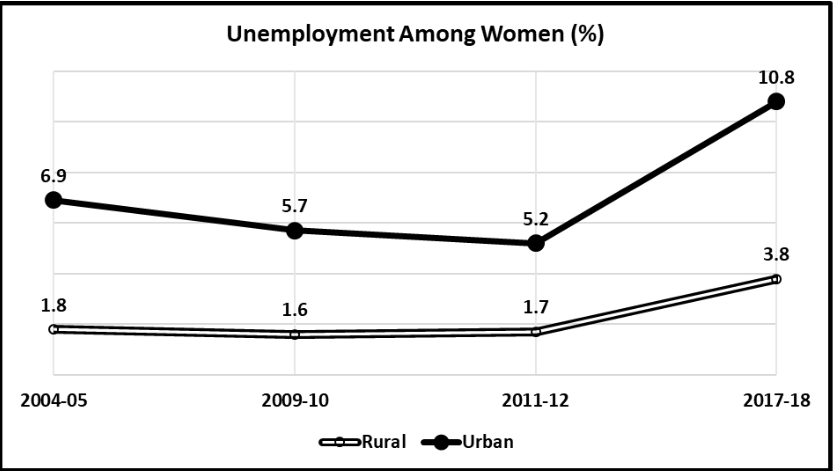 If one in five educated women and one in three young women are available and seeking work, this can hardly be a situation where women don’t want to work. The reality is that women do want work but are unable to get opportunities. Available work is too low paying (see below) or too unsafe and unsecure. In addition, women have to face patriarchal resistance from family members who still hold the regressive view that women should remain confined to their homes and not stir outside.

So, what are the rest of the women doing? The bulk of them are no longer in the labour force, that is, they are not seeking jobs. They confine themselves to domestic duties, which in India include such drudgery as collecting firewood or fetching water, as also looking after cattle. Needless to say, that they also do all the care work at home.

This situation was there earlier too but in recent years, the decline in work opportunities and specifically, the decline in farm jobs due to deep agrarian crisis, has pushed more and more women back into the four walls of stultifying domesticity.

Compelled by the pressing need to supplement family incomes in these times of economic crisis, some women do go out to work but find that the wage or salary levels are shockingly low, as can be seen in the table below, drawn from the PLFS report. Note that even among the regular wage or salary earners, women’s monthly earnings are 34% less than men’s in rural areas and 19% less in urban areas. The biggest difference in earnings is in the vast self-employed sector where women’s earnings are less than half of men’s in both rural and urban areas. This is because these self-employed women workers usually run their own small enterprises like petty shops or they are service providers of all kinds, assisting in the main work being done by the men folk, with hardly any demarcated earning. Also, many of the very small shops (like selling candies or tobacco products or vegetables) is left to women while the men go for other work.

The main employment for women in the self-employed category comes from personal and other services which employ over 44% women in urban areas and about 9% in rural areas. These are all the maids, cooks, ayahs, housekeepers, sanitation workers, press walis, and similar service providers that smoothen the lives of families with disposable incomes. Women are also employed by government in large numbers in out-sourced care work like health workers, anganwadi workers, cooks in schools, nurses etc. – all of them at very low wages and no job security.

What the latest data from this PLFS unequivocally establishes is that while the overall employment situation is dire (with joblessness at 6.1%), women continue to suffer the brunt of this crisis with higher rates of unemployment, lesser opportunities and continued lower wages. And, the present govt. – like all its predecessors – has no clue about how to solve this crisis. Unfortunately, with a govt. that believes that women are best suited to decorate homes, serve their husbands and rear children, not much can be expected in terms of resolving this crisis.