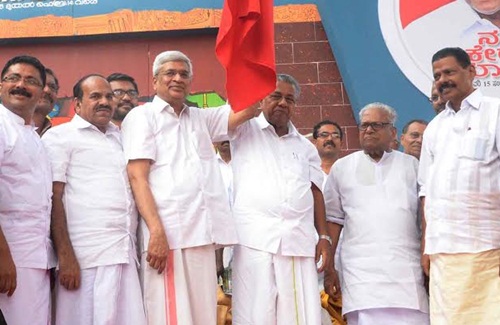 The month long Nava Kerala march with the theme of a “corruption free and secular progressive Kerala” got underway today from Uppala, the northen tip of Kerala in Kasargode district. CPI (M) Polit Bureau member Com. Prakash Karat formally inaugurated the Nava Kerala March by handing over the red flag to Com. Pinarayi Vijayan, who is leading the march. Opposition leader Com. V S Achuthanandan and Kerala state secretary Com. Kodiyeri Balakrishnan also addressed the meeting to mark the commencement of the march. After traversing the whole state, the march will conclude on February 14, after a period of 30 days.

In his inaugural speech Prakash Karat said that the March will spread the message of secular Kerala and corruption free development. The last five year UDF rule in the state, he observed, has seen the state going backwards in development. All traditional industries like Coir, Cashew and Handloom are suffering distress due to negligence, he added.

Thousands of people from various parts of Kasargode district participated in the public meeting.